During the 10th century, Hangzhou became the capital of the Wuyue kingdom. Named Xifu at that time, it became a major cultural center, boasting fascinating Buddhist temple architecture. It also had diplomatic connections with neighboring countries.

Tang Dynasty
Hangzhou was made the seat of the zhou (very roughly, "county") of Hang in AD 589, entitling it to a city wall which was constructed two years later. By a longstanding convention also seen in other cities like Guangzhou and Fuzhou, the city took on the name of the area it administered and became known as Hangzhou. Hangzhou was at the southern end of China's Grand Canal which extends to Beijing. The canal evolved over centuries but reached its full length by 609.

In the Tang dynasty, Bai Juyi was appointed governor of Hangzhou. Already an accomplished and famous poet, his deeds at Hangzhou have led to his being praised as a great governor. He noticed that the farmland nearby depended on the water of West Lake, but due to the negligence of previous governors, the old dyke had collapsed, and the lake so dried out that the local farmers were suffering from severe drought. He ordered the construction of a stronger and taller dyke, with a dam to control the flow of water, thus providing water for irrigation and mitigating the drought problem. The livelihood of local people of Hangzhou improved over the following years. Bai Juyi used his leisure time to enjoy the beauty of West Lake, visiting it almost daily. He also ordered the construction of a causeway connecting Broken Bridge with Solitary Hill to allow walking, instead of requiring a boat. He then had willows and other trees planted along the dyke, making it a beautiful landmark. This causeway was later named "Bai Causeway", in his honor.

It is listed as one of the Seven Ancient Capitals of China. It was first the capital of the Wuyue Kingdom from 907 to 978 during the Five Dynasties and Ten Kingdoms Period. Named Xifu at the time, it was one of the three great bastions of culture in southern China during the tenth century, along with Nanjing and Chengdu. Leaders of Wuyue were noted patrons of the arts, particularly of Buddhist temple architecture and artwork. Hangzhou also became a cosmopolitan center, drawing scholars from throughout China and conducting diplomacy with neighboring Chinese states, and also with Japan, Goryeo, and the Khitan Liao dynasty.

Southern Song
Hangzhou was chosen as the new capital of the Southern Song Dynasty when they regrouped after their defeat at the hands of the Jin in 1123. It remained the capital from the early 12th century until the Mongol invasion of 1276, and was known as Lin'an. It served as the seat of the imperial government, a center of trade and entertainment, and the nexus of the main branches of the civil service. During that time, the city was a sort of gravitational center of Chinese civilization: what used to be considered "central China" in the north was taken by the Jin, an ethnic minority dynasty ruled by Jurchens. 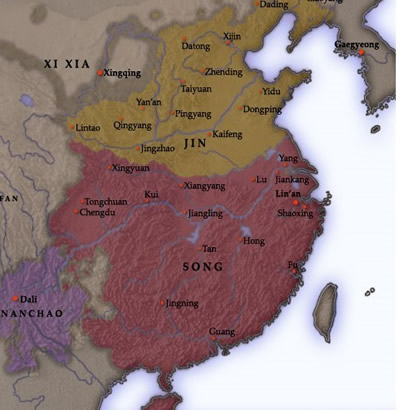 During the Southern Song Dynasty, commercial expansion, an influx of refugees from the conquered north, and the growth of the official and military establishments, led to a corresponding population increase and the city developed well outside its 9th century ramparts. According to the Encyclop?dia Britannica, Hangzhou had a population of over 2 million at that time, while historian Jacques Gernet has estimated that the population of Hangzhou numbered well over one million by 1276. (Official Chinese census figures from the year 1270 listed some 186,330 families in residence and probably failed to count non-residents and soldiers.) It is believed that Hangzhou was the largest city in the world from 1180 to 1315 and from 1348 to 1358.

Because of the large population and densely-crowded (often multi-story) wooden buildings, Hangzhou was particularly vulnerable to fires. Major conflagrations destroyed large sections of the city in 1132, 1137, 1208, 1229, 1237, and 1275 while smaller fires occurred nearly every year. The 1237 fire alone was recorded to have destroyed 30,000 dwellings. To combat this threat, the government established an elaborate system for fighting fires, erected watchtowers, devised a system of lantern and flag signals to identify the source of the flames and direct the response, and charged more than 3,000 soldiers with the task of putting out fires.

The city of Hangzhou was besieged and captured by the advancing Mongol armies of Kublai Khan in 1276, three years before the final collapse of the empire. The capital of the new Yuan Dynasty was established in the city of Dadu (Beijing).

The Venetian Marco Polo supposedly visited Hangzhou in the late 13th century. His book refers to the city as "beyond dispute the finest and the noblest in the world." He called the city Kinsay (or Kinsai) which simply means "capital" in Chinese (actually Polo used a Persianized version of the word). Although he exaggerated that the city was over one hundred miles in diameter and had 12,000 stone bridges, he still presented elegant prose about the country: "The number and wealth of the merchants, and the amount of goods that passed through their hands, was so enormous that no man could form a just estimate thereof."

The renowned 14th century Moroccan explorer Ibn Battuta said it was "the biggest city I have ever seen on the face of the earth."

Ming and after
The city remained an important port until the middle of the Ming Dynasty era when its harbor slowly silted up.

As late as the latter part of the 16th and early 17th centuries, the city was an important center of Chinese Jewry, and may have been the original home of the better-known Kaifeng Jewish community. 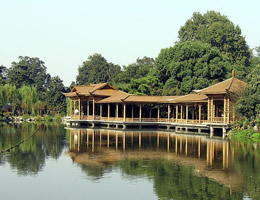 Lakeside Buildings on the West Lake

In 1848 during the Qing dynasty, Hangzhou was described as the "stronghold" of Islam in China, the city containing several mosques with Arabic inscriptions. A Hui from Ningbo also told an Englishman that Hanzhou was the "Stronghold" of Islam in Zhejiang province, containing multiple mosques, compared to his small congregation of aroudn 30 families in Ningbo for his Mosque.

In 1856 and 1860, the Taiping Heavenly Kingdom occupied Hangzhou and caused heavy damage to the city.

Hangzhou was ruled by Republic of China government under the Kuomintang from 1928 to 1949. On May 3, 1949, the People's Liberation Army entered Hangzhou and the city came under Communist control. After Deng Xiaoping's reformist policies began in 1978, Hangzhou took advantage of being situated in the Yangtze River Delta to bolster its development. It is now one of China's most prosperous major cities.