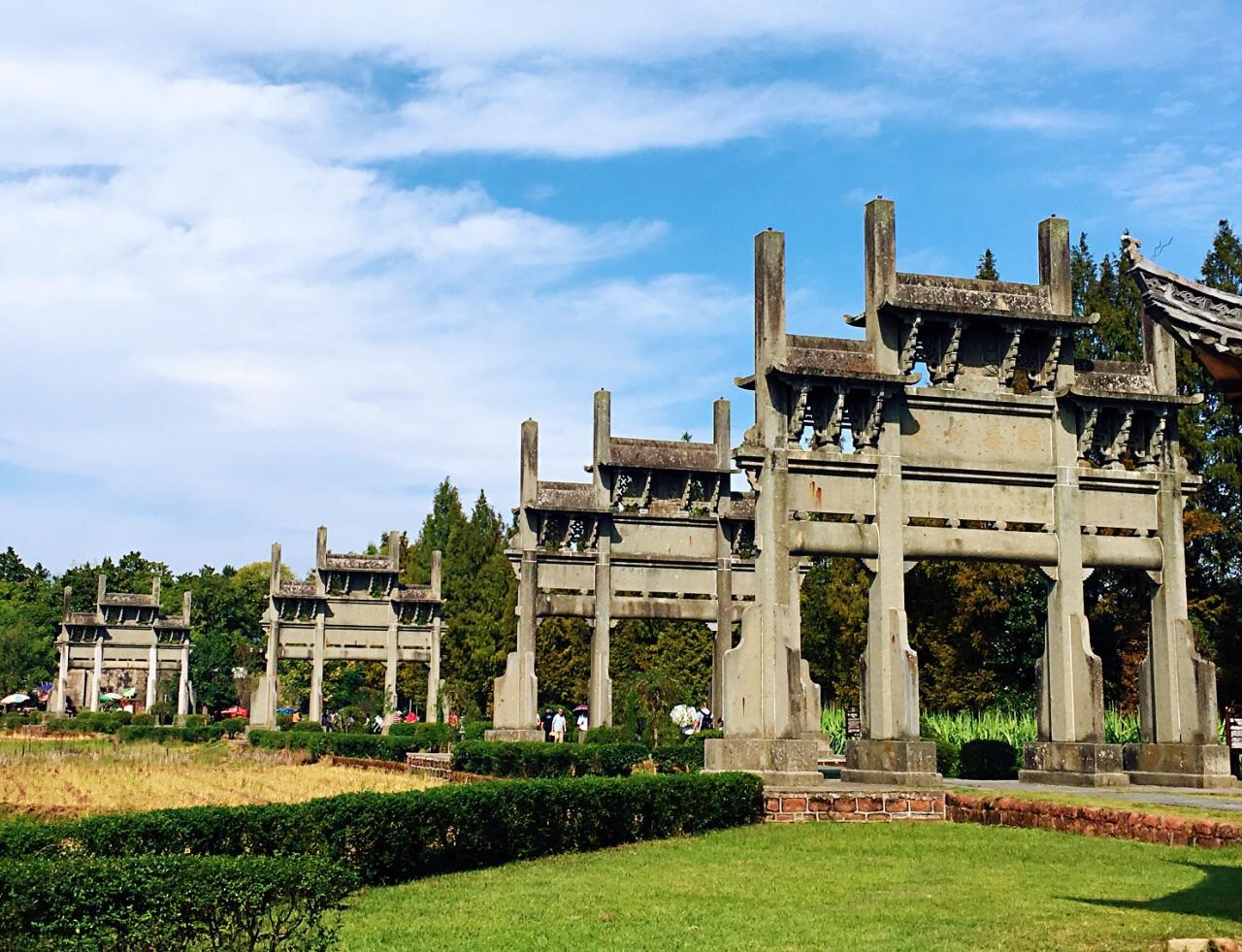 Located in Shexian County of Huangshan City, 6.5 kilometers away from Shexian county, is near the southern foot of Huangshan Mountain is famous for its memorial archways (gates). Tangyue village is one of the historical and cultural cities in China. The Tangyue Memorial Archways are composed of seven arches, winding their ways into a group, simple and elegant. 3 were built in Ming dynasty, the other were built in Qing. All of them are in order of loyalty, filial piety, moral integrity and justice.

In recent years, it used to be the scenery for filming such films as "Dream of the Red Mansions" and "Smoke Blocked Double-eaves", it has become a world-famous tourist spot of top culture grade. It is the biggest memorial archway in Anhui Province, and it is flanked by the Men Ancestral Temple and Women Ancestral Temple. Also an important tourist location in Huangshan City, the two temples have many delicate brick carvings, stone carvings and wood carvings.What makes the arches of Tangyue Village so unusual besides the sheer number is that each and every one had to be personally approved by the emperor before they could be erected

Culture of the Chinese Archway
Archway called “Pailou” or “Paifang” in Chinese. It was a unique architectural form in ancient China, which is a product of the feudal society, yet they embody the wisdom and artistry of ancient craftsmen. Furthermore, each arch, regardless of the size is related to a particular person or an event. Every arch has a history or a story with profound implications and the arches are memories of the past.The building materials vary from wood to stone to glazed tile. It was usually erected at the entrance of a village, street or tomb.

These grand and magnificent archways demonstrated the unique talents and distinguished skills possessed by ancient architects and construction workers. Every archway bears a touching story, among which the most widely-known ones are related to "Jie Jin San Dong Archway" (Chastity Archway) and "Ci Xiao Li Archway" (Filial Piety Archway). The building of "Jie Jin San Dong Archway" was for commenting a stepmother who kept chaste and and motherly when cultivating her stepchild after her husband died. Record says that, a widow whose surname is Wu, the second wife of Bao Wen, lost her husband when she was 29. She died 31 years later and her kind-hearted action moved the local officials, so they decided to build an archway to honor her despite of the convention that erecting an archway for a step-wife was prohibited.

The “Ci Xiao Li Archway” was built in the Yongle Period of the Ming Dynasty to honor the father and son Baosheyan and Baoshouxun. They were captured by rebels who wanted to kill one of them and let them choose amongst them who was to die. Both tried to use their own death to save the others’ life. To honor the father and son, the memorial arch was commissioned by the emperor. Later, Qianlong, a Qing Dynasty emperor, appropriated silver to repair it and also inscribed a couplet: "There is nothing that comes second to filial love and piety.

Story of Archway
It was a unique architectural form in ancient China. Firstly, archway reflects people's life aspirations in feudal times, which usually can be read from inscriptions on the beams. Archway presents perfect harmony of ancient Chinese architectural modeling art and sculpting art, which both enjoy long history and attract interests of the world for their unique styles and artistic value. The sacred emotions of the ancient Chinese rested on archway too. Erecting an archway was a very solemn event. The structure mirrors feudal ethics and traditional norms in ancient China.

As a physical architecture of those ethics and norms, various Archways, such as chastity archway (mostly for widowed women exclusively), loyalty archway and filial piety archway, were set up all around. Archway witnesses history. Many an archway was built to commemorate historical events and important historic figures, thus those structures, are of great importance in the research of Chinese history. Archway has long become a symbol of China for its long history, rich connotation and unique art value. It is of high value on the research of the feudal ethical codes and patriarchal norms.

Tangyue Village is quite important in studying the patriarchal clan system, as in China's feudal society, it was rare for women to have the privilege to be honored in an ancestral temple not only in Huangshan but also a common phenomenon all over China.

How to get to Tangyue Village
1. By flight: take a flight to Huangshan Tunxi International Airport ? taxi to Huangshan bus station ? transfer to Shexian county bus to Zhengcun intersection ? take bus No.2 to Tangyue ancient village.

2. By train: Take a high speed train to Shexian north station first, then take a public bus to bus station, and transfer to bus No.2 to Tangyue ancient village.

Information
Admission Fee: 80RMB include Bao's family garden
Opening Hours: 7:30am—5:30pm
How to get there: By Bus: Shexian County Railway Station has buses to Tangyue Memorial Archways, which is only 6 km west of the country seat of Shexian, or you can just take a taxi to the archways from Shexian.