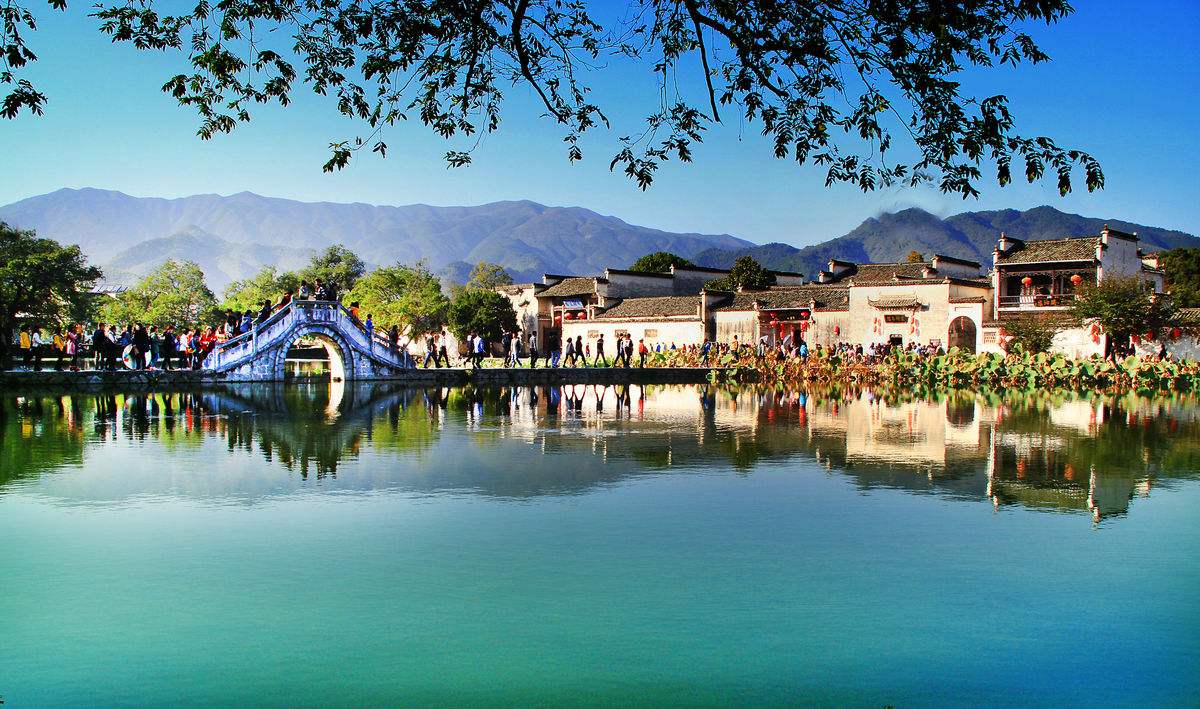 Hongcun village is located in Yixian County, Huangshan City. It is a typical traditional Chinese village. It was built in 1131-1162.

Hongcun is a "Cattle shaped village". From a high point of view, the shape of the whole village looks like an ox lying on the side of a stream in front of a mountain. Hongcun is surrounded by mountains on three sides, and its layout basically faces the south. The site selection, layout and architectural form of the whole village emphasize the ideal state of harmony between man and nature, respect for nature and utilization of nature, so that the overall outline of Hongcun village is harmonious with the natural scenery such as topography, landform and landscape. There are more than 140 well preserved residential buildings in the Ming and Qing Dynasties in Hongcun. The main scenic spots are Yuezhao pond, Nanhu lake, Nanhu academy, Chengzhitang hall, Hongcun water channel, Ancient trees, Shuren hall, Ming Dynasty ancestral hall, Yuexu hall, etc.

In 2000, the ancient villages in southern Anhui, represented by Hongcun, were listed in the world cultural heritage list by UNESCO. On May 5, 2011, Hongcun scenic spot was officially awarded the title of "national AAAAA tourist attraction" by the National Tourism Administration.

Background
Hongcun town was called "Hongcun" in ancient times. In the early Southern Song Dynasty, Wang Yanji, the founder of Hongcun village, was caught in a fire. His family moved from Qishu village to the upper reaches of the stream, and built 13 houses on Leigang mountain, which is the prototype of Hongcun Village. He also built Suiyang Pavilion at the entrance of the village as a landmark building for entering the village.

With the development of feudal economy and the prosperity of culture, Huizhou's economy has also got excellent development. Wang's ancestors became more and more officials and businessmen. They accumulated a lot of money and wealth to glorify their ancestors. They bought fields and houses in their hometown and built bridges to pave the way.

From 1375 to 1606, Hongcun built such ancestral halls and temples as lesu hall, Prince Temple and Zhengyi hall, and gradually formed a residential community of the same clan and surname based on blood and geographical relationship; from 1662 to 1911, Nanhu academy, Shuren hall, Sanli hall, Lexian hall, Chengzhi hall and other large Academies and houses were built in Hongcun. After the founding of new China in 1949, Yixian government adopted unified management and protection of Hongcun; after 1982, Yixian established a cultural relics management institute, which had a special management organization for the protection and maintenance of Ming and Qing residential buildings in Hongcun. 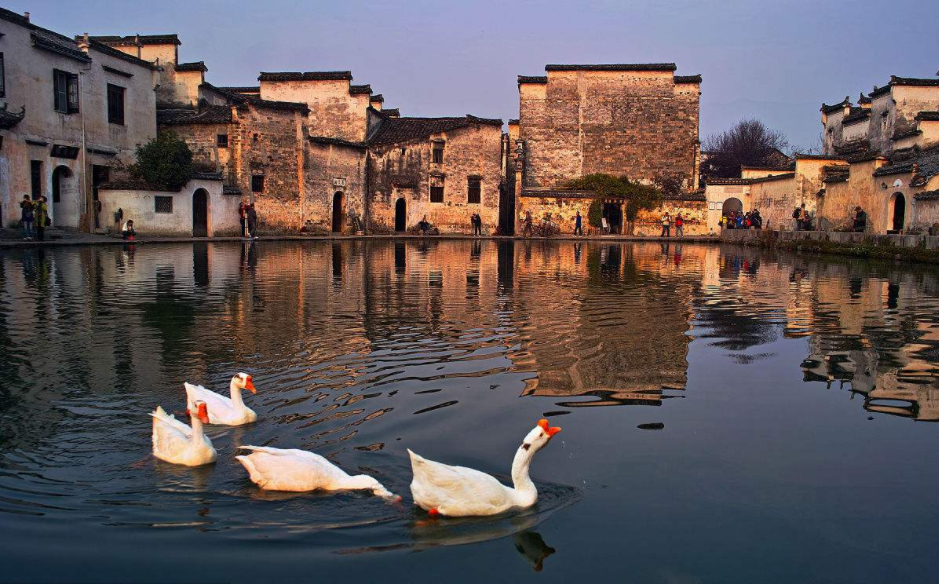 What to see in Hongcun Village

Nanhu Lake
Hongcun is a "Cattle shaped village". From a high point of view, the shape of the whole village looks like an ox lying on the side of a stream in front of a mountain. South Lake is in the position of "ox tripe". There is an arch bridge on the lake, called Painting bridge. Every year, a large number of students and artists from the art college come here to sketch and paint. Huizhou buildings on both sides of the lake are reflected on the water, just like a picture scroll. 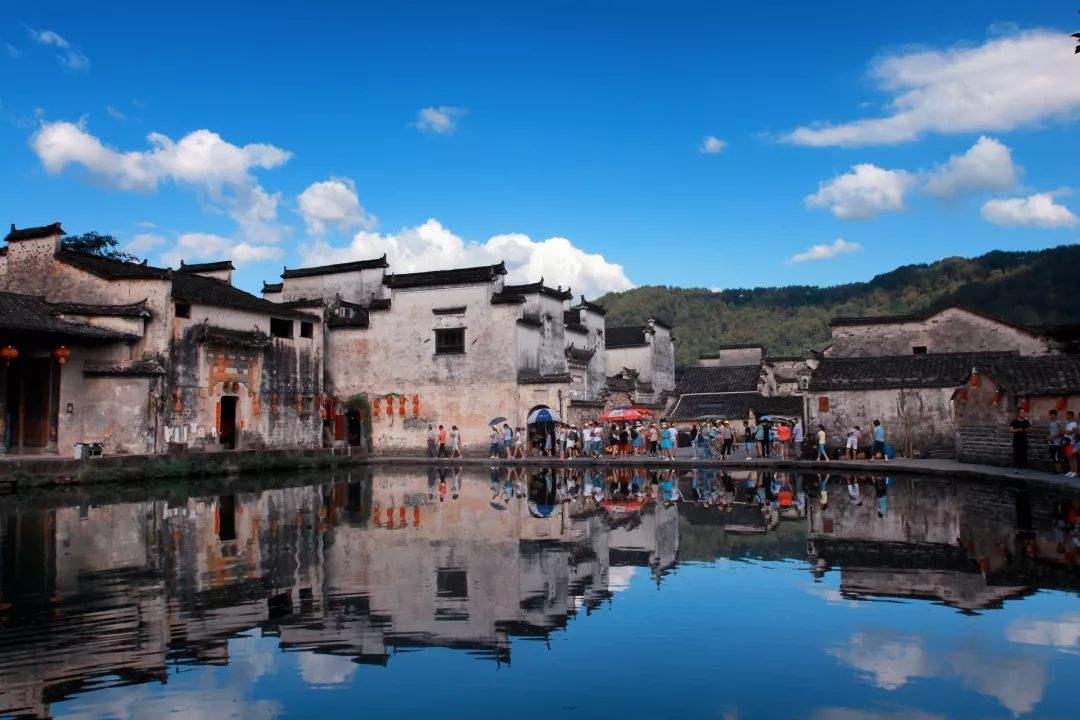 Chengzhitang Hall
Chengzhitang hall, known as the "Folk Palace Museum", was built around 1855. The whole building is made of wood, magnificent, carved beams and painted buildings. There is also a brick carving in the housekeeper's courtyard, which is very exquisite. 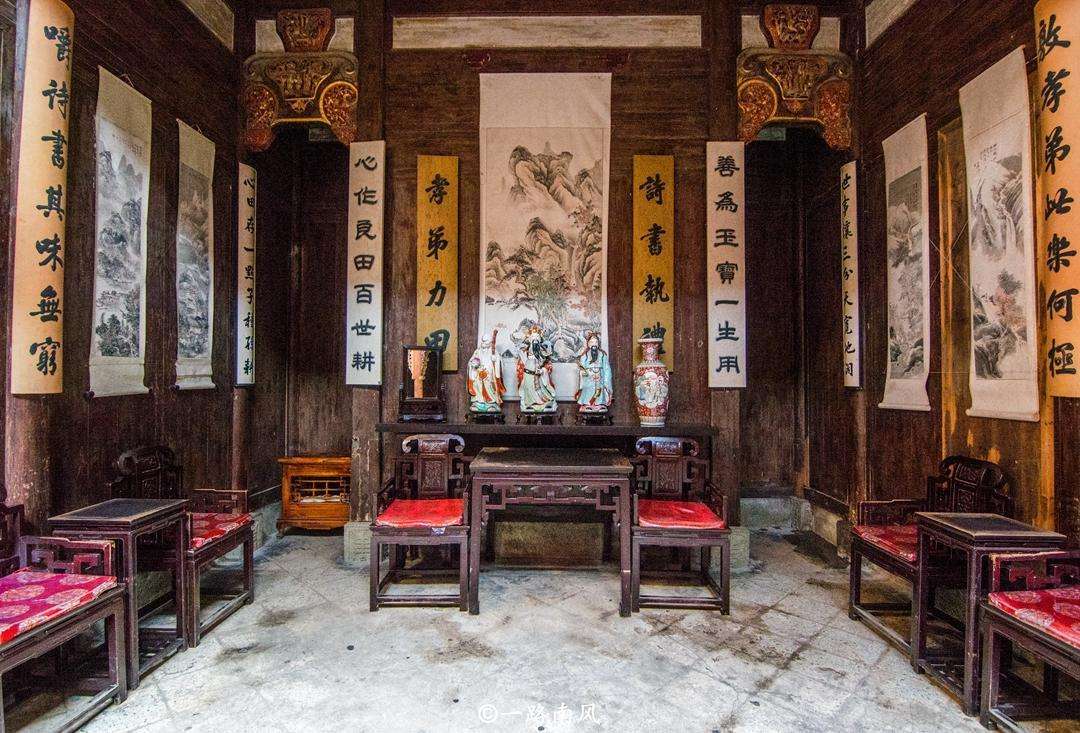 Yuezhao Pond
The Yuezhao Pond is so named because it looks like a crescent moon. Yuezhao Pond is located in the center of the village, which is equivalent to the central urban area. Huizhou architectural patterns on the landscape stamps issued in 1982 are selected here. 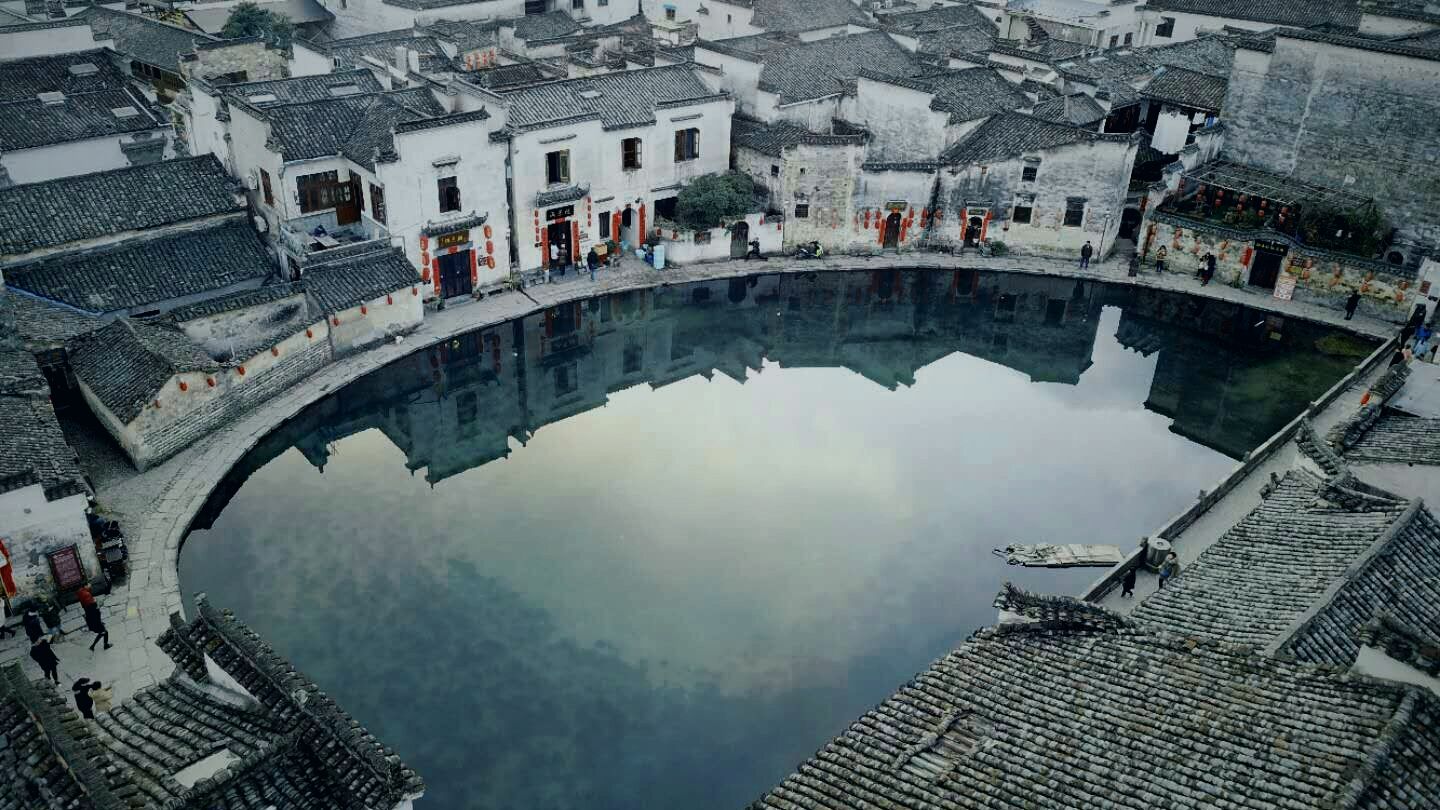 Ancient Trees
There are two big ancient trees at the entrance of the ancient village, one is Maple poplar and the other is Ginkgo biloba. In the past, if there was a funeral in the village, villagers would turn around the ginkgo tree three times, and around the maple poplar three times if there was a happy event. This is also the tradition and symbol of Hongcun since ancient times, which is of great ornamental value. 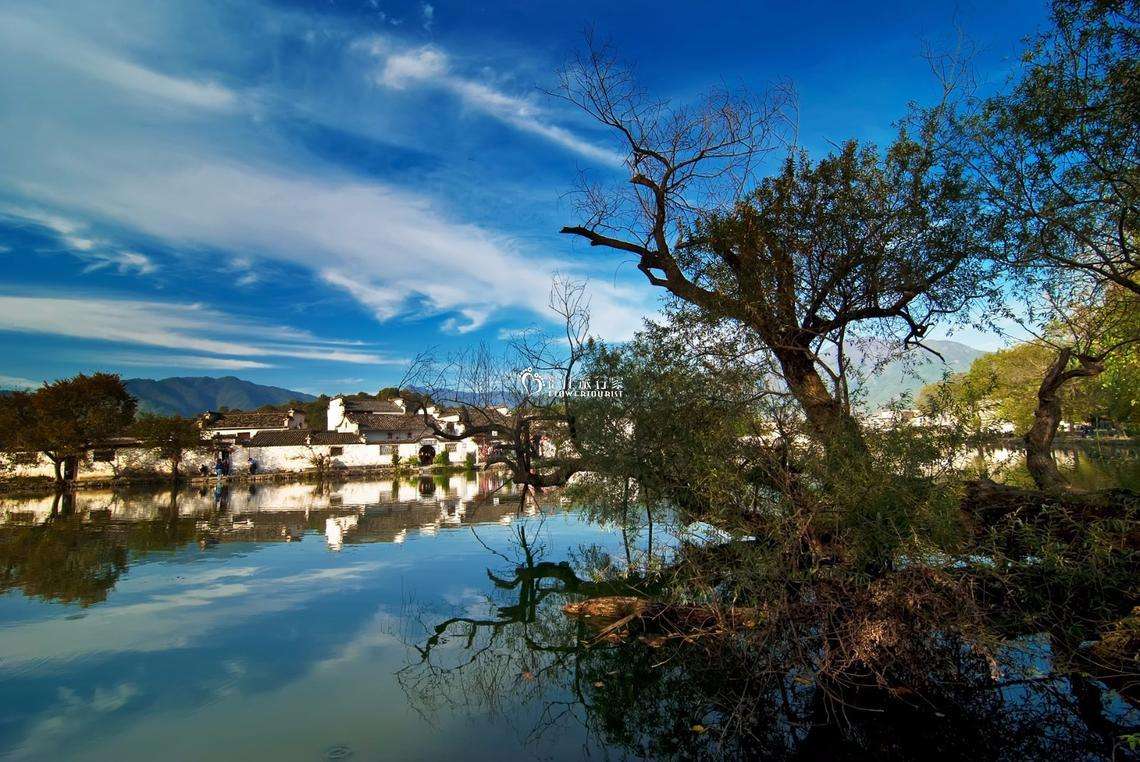 Wang's Ancestral hall
Wang's ancestral hall is located at the edge of Yuezhao Pond. It is a typical Hui style building, one of which is a place for family gathering and dealing with matters of large and small. "The other is to worship the memorial tablets of our ancestors, and the third entrance has been destroyed. 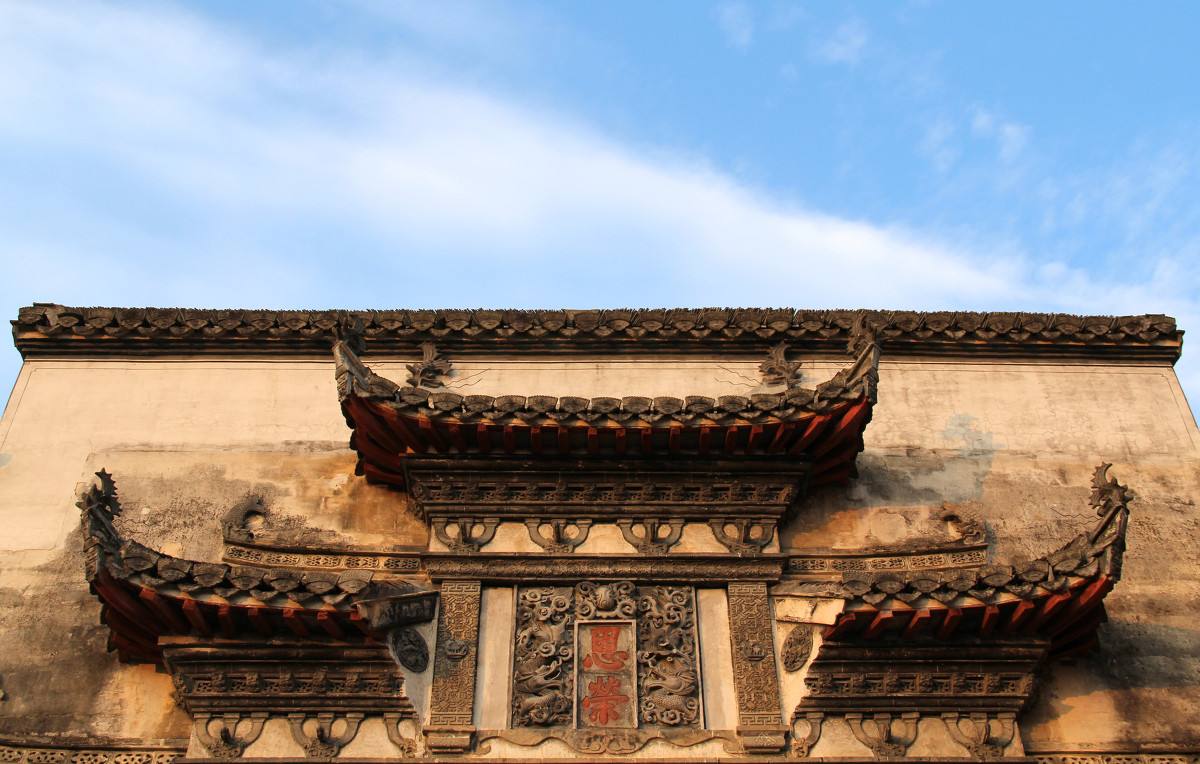 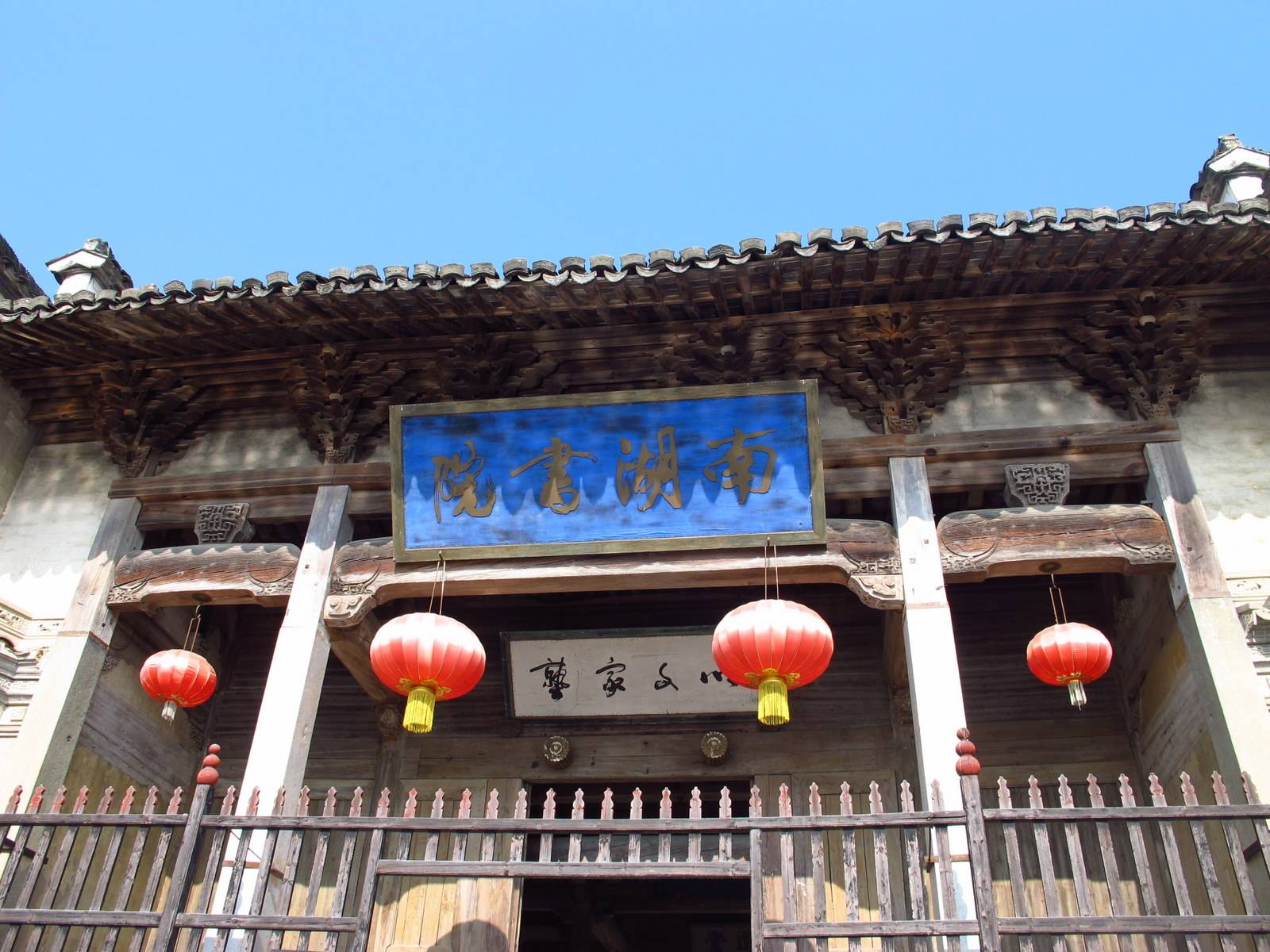 Layout of the Hongcun Village
The layout of Hongcun village takes Yuezhao Pond as the core area. Wang's ancestral hall and Lesxutang hall are the sustenance and dependence of clan spirit. Therefore, Yuezhao Pond has become the most frequent space for the flow of people in Hongcun. There are common public activities and space along the canal in the village, so streets and alleys are naturally formed on the edge of the canal. In the east-west direction, the front street (Main Street) is the axis running through the busy business district and the East-West exit. Therefore, the pattern of Hongcun is Yuezhao Pond as the center, connecting the front street, back street and Zhenshui Lane Street of Shangshui River as the main crossing line, and there are Xixi River Bank, Chaxing alley, Zhongshan Road and other streets and alleys in the north-south direction, forming a network pattern of streets and alleys.

Architectural Features
The ancient buildings in Hongcun are Huizhou buildings, and Chengzhitang hall is one of the representative works of large-scale, magnificent and exquisite dwellings, known as the "Folk Palace Museum". The streets and alleys of Hongcun are crisscross, and the architectural carving, indoor and outdoor decoration have distinctive local cultural characteristics. Hui Style Architecture emphasizes that houses are full of wood carvings, brick carvings and stone carvings. Horse head walls are used for fire prevention, while patios are used to store water when it rains. Hundreds of residential buildings of Ming and Qing Dynasties in Hongcun are typical Hui style buildings, known as "Museum of ancient residential buildings".

What to eat in Hongcun (Huangshan)
For tourists to Huangshan, Hui cuisine is must be tasted, especially because it uses the most natural ingredients. As one of the eight traditional cuisines in China, Hui cuisine first appeared in Shexian county and flourished in Ming and Qing Dynasties. Stewing, steam are common techniques, while frying are much less frequently used. There are more than 100 kinds of Huizhou traditional specialties. Hui cuisine gained its popularity alongside the expanding influence of Hui merchants.

Transportation
Public bus line: Take a bus to Hongcun once you arrived in Yixian County, 2 yuan / person, and you can arrive in 15 minutes.

Bus: There is a direct bus from Huangshan Scenic Area coach station to Hongcun village.

Tour The Hongcun Village with Hangzhou Huangshan Private Tour
We design private and tailor-made Hangzhou Huangshan Tours customized to your style of travel at affordable local prices.  We will provide a private & spacious car and a local professional tour guide with over 5 years guiding experience only work for you or your group. Transport, ticket, and dining (We find the most authentic dishes popular with locals) all we will arrange for you according your requirements. Please check our most popular Hangzhou&Huangshan Tours including The Hongcun Village as below: