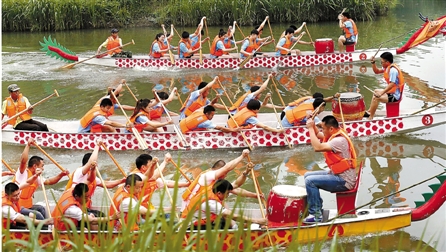 
The 8th China Bamboo Cultural Festival held in Huangshan city, Anhui province on 18, Nov, 2016. As the country with the most bamboo species and a long planting history, China now leads in the world in terms of planting area, variety of bamboo products and export volume, Zhang Yongli, deputy director of State Forestry Administration said.


The bamboo forest area in the country reached six million hectares, according to the data of the eighth national forestry survey early this year, 11 percent more than the previous survey. The national production value of the bamboo industry was 167 billion yuan in 2013, 36 percent more than in 2012.

Zhang Xun and Xu Yuan died on January 9 of Chinese calendar in Tang Dynasty, the Yanshi Town in Weizhou District holds the temple fair in memorial in the day every year, so called Shangjiu temple fair. It lasts three days, begins on eighth, ends on tenth. In the period of the temple fair, hold activities of the visiting absolute being, the fiesta absolute being, take the set to sing an opera, the mongers everyplace also come to rush through the meeting, decorate the stands, various agriculture vice- soil special product articles and farm implements, the general merchandise complete with everything. Now Shangjiu temple fair has already lost the meaning of originally in hounr of Zhang Xun and Xu Yuan, cancels the visiting absolute being activity, becomes the annual supplies exchanges meeting.

The Wuchang temple fair of Haiyang in Xiuning Country is on May 1st of Chinese calendar. Then the common people of four countries come to Haiyang to burn the joss stick, the imprecation five Chang absolute being lords exorcise to dispel evil, eliminate to be fierce to turn lucky. Green, white, black, red, yellow,blue each color of turquoise the ensign son flaunt, Shijingdan, Sujingpai, Wanminshan, Zhizhazhu Maniuyangouxiang, Pailougenshang, next are a place drama troops, the miscellaneous play troops. This temple fair originated in the beginning of Ming Dynasty. Zhu Yuanzhang and Chen Youliang once beat the block to saw war for several years in Wannan, many of soldiers and common people died. After being the emperor, he issuesed order the common people of China-Nan, the every village set up small temples of five Chinese foot, falling in action soldiers " five artificial five", be subjected to common people's oblation. ? Ming History ? record the Royal to offer sacrifices to" an ex- is behind Wuchang of the absolute being " to say. Pass from generation to generation thus, then becomes the very prosperous joss stick Wuchang temple temple fair.

It is the Linxi Town's traditional temple fair in the near suburb of Tunxi. It lasts 3 days; September 9 of Chinese calendar is a positive day. In this day, the good believers of four countries and eight towns form into groups to rush through to come to do obeisance Zhouwang bodhisattva, and bring various agriculture by-products and the handicraft industry products to carry on the bargain. In the period of the temple fair, take the set to sing an opera, sing to the sunrise from the sunset, all night till dawn, it is very noisy. After found a nation, the temple fair becomes the commodity fair of the agriculture by-products and the handicraft industry articles.

Lantern Festival is one of the most traditional festivals in China celebrated on the 15th day of the first month of the Chinese lunar year.
On the night of the festival, temples and businesses are decorated with colorful lanterns made of paper, gauze and glass, painting with legendary figures, landscapes as well as the flowers and birds. There are also the performances of drums and dragon dance in the street and lanes.
On the day, people in Huangshan will eat sweet round dumplings made of glutinous rice flour filled with various kinds of fillings. The snack is called Yuanxiao in Chinese, so the festival is also named the Yuanxiao Festival. They will guess lantern riddles, enjoy the beautiful lanterns with friends and go outside to see locals play drgon Dance.

The Spring Festival is another major celebration. Besides eating, folk recreations play a major role in the festivities. These include: dragon dance, lion dance, folk art parade, fish-lantern dance, lantern-boat dance, triumph drum dance, and fireworks, it is the time for the whole families to reunite together, which is similar with Christmas Day to the westerners.

Qingming Festival (also known as Pure Brightness Festival or Tomb-sweeping Day), which falls on either April 4th or 5th of the gregorian calendar, is one of the Chinese Twenty-four Solar Terms. It is not only a seasonal symbol; it is also a day of paying respect to the dead, a spring outing, and other activities. Main ones are tomb sweeping, taking a spring outing, and flying kites. Some other lost customs like wearing willow branches on the head and riding on swings have added infinite joy in past days. It is a combination of sadness and happiness.

Traditional festivals make up a very important part of the local culture. On the day of Lixia (a lunar day to mark the beginning of summer, sowing time for farmers), people get together to indulge themselves in feasts, believing that this will signify a bumper harvest and a full stomach for the next year. To mark the beginning of the festival, local people boil eggs and smash them on their house threshold as a sacrifice to the God of Door. Breakfast itself is the most important part of the festival and features fried rice with eggs 8. Chinese chives, symbols denoting permanent happiness.

People in Huangshan celebrate the festival on the 15th day of the 8th month according to Chinese lunar calendar. It's an evening celebration when families gather together to light lanterns, eat moon cakes and appreciate the round moon. On that night, the moon appears to be at its roundest and brightest. The full moon is a symbol for family reunion, which is why that day is also known as the Festival of Reunion.

People in Huangshan celebrated for having four wonders of mountain scenery: spectacular peaks, odd-shaped rocks, seas of cloud and hot springs. Huangshan Mountain, tall, straight, magnificent and beautiful, has been a tourist attraction since ancient times, and now is a world natural cultural heritage. The first Huangshan International Tourism Festival was held in Huangshan City, which was highly acclaimed by domestic and foreign tourists in 1991. Since then, the festival has further introduced Huangshan Mountain to domestic and foreign tourists and promoted the advances of Huangshan tourism. Visitors can have a chance to appreciate the traditional lantern fair, watch performances of folk customs. People in Huangshan celebrate it every two years

The fishing people of Yuliang in An County are every time in September or October of Chinese calendar, merge with two wood ships a double, unload to the ship roof, use the bamboo wood system, put with gauze outside, become the stations, towers, buildings, pavilions, memorial arches, carps...etc., inside light the candles. The lights' side is a music band, the sound of music and song play together, deafening din of gongs and drums. There are total six-double ships, still have the quite a few of wood boats to follow afterward. The session is in the Lian River of the Yuliang Dam, each roam about at pleasure one night. A light and light's shade are very sublime. The bright ships are called Shuioyou again, still having the Hanyou at the same time, namely the country people on the coast play the lights and respect various bodhisattva. In the river and on the coasts, the Shuiyou and Hanyou hand over with drought mutually the reflecting, the wonderful interesting is endless, the common people of four countries swarm about to appreciate, it is uncommon noisy.