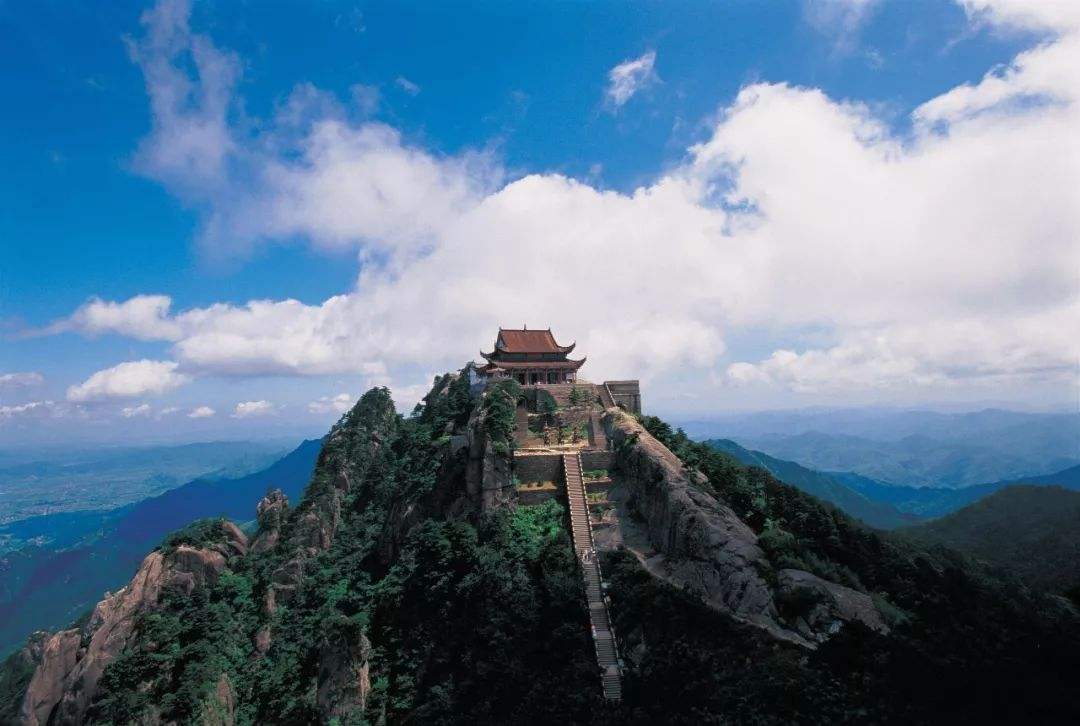 Jiuhua Mountain, which was formerly called Jiuzi Mountain, is located in Qingyang County, Chizhou city, southeastern part of Chizhou City, 20 km southwest of the county seat. Mount Jiuhua was called Mount Lingyang in Han Dynasty. It was called Mount Jiuzi (???) in Liang and Chen Dynasties of South Dynasties. A legend says that the great poet Li Bai of Tang Dynasty travelled here and wrote down "Magic is divided to two branches, sacred mountain generates nine glories." (?????,?????). Thus it was named Mount Jiuhua. The gross area reaches 120 square kilometers, while the protection area reaches 114 square kilometers. Shiwang Peak is the highest one with an elevation of 1342 meters above sea level. Together with Wutai Mountain in Shanxi, Emei Mountain in Sichuan and Putuo Mountain in Zhejiang. Jiuhua Mountain is called one of the four great Buddhist Mountains in China. In 719 AD, Kim Qiaoque, a Silla prince (today's Qingzhou city in South Korea) came to Jiuhua Mountain and cultivated himself for 75 years. He died at 99 years of age, his corporeal body stayed intact.

Jiuhua Mountain is one of the four great Buddhist Mountains in China. Many of the mountain's shrines and temples are dedicated to Ksitigarbha (known in Chinese as Dìzàng, Chinese: ??, in Japanese as Jizo), who is a bodhisattva and protector of beings in hell realms according to Mahayana Buddhist tradition. Pious Buddhists often visit Anhui to climb to Greater Tiantai peak, which is regarded as Jiuhuashan's most important peak, although it is not the tallest.

History & Background
Combined with natural wonders, including a sea of clouds, gorgeous sunrises, frosty mists, and flammule, Jiuhua Mountain is a majestic sight in all its variety. It is known as the most beautiful place in the area south of the Yangtze River. It is among first group of the national key scenic areas approved by the state, as well as a national 5-A level tourism zone. Jiuhua Mountain is a famous historical and cultural mountain. More than 20 academies of classical learning have been successively established here since ancient times, including the Taibai, Teng Zijing and Yangming academies. There are over 2,000 extant cultural relics, and here too you can find 500 or so poems and essays by famous writers and scholars from all previous dynasties. Among these, you will discover some rare treasures, including the Patra-Leaf Sutra of the Tang Dynasty (618-907), the Tripitaka Sutra and Blood Sutras (written with blood drawn from the authors' fingers) of the Ming Dynasty (1368-1644), the imperial decree of Emperor Wanii in the Ming Dynasty (1563-1620), and handwritten manuscripts by Emperors of Kangxi and Qianlong of the Qing Dynasty (1616-1911).

Jiuhua Mountain is one of the four great Buddhist Mountains in China. Since its opening in 1979, Jiuhua Mountain, with its abundant Buddhist culture and uniquely attractive scenery, has enjoyed a high reputation in Southeast Asia, South Korea and Japan. It is known as the mountain of Dizang Buddhisattva and for having a large number of whole Buddhist relics. With connected mountain peaks and various unusual stone formations, Jiuhua Mountain consists of 99 peaks, numerous brooks, waterfalls, secluded caves and strangely-shaped pine trees. All of these contribute to the fresh and natural landscapes. Many of the mountain's shrines and temples are dedicated to Ksitigarbha (known in Chinese as Dìzàng, Chinese: ??, in Japanese as Jizo), who is a bodhisattva and protector of beings in hell realms according to Mahayana Buddhist tradition. Pious Buddhists often visit Anhui to climb to Greater Tiantai peak, which is regarded as Jiuhuashan's most important peak, although it is not the tallest.

What to see in Jiuhuashan Mountain

Huacheng Temple
Built in 401, Huacheng Temple is the first and the oldest temple on Jiuhua Shan and the most important one. It has the history of more than 1500 years. It is dedicated to a monk JinQiaojue who died in that temple at the ripe old age of 99 and was regarded as an incarnation of Dizang, the bodhisattva in charge of the six underworlds. The temple was renovated in 1681 and had a total of 72 halls. The temple was partially destroyed in the chaos that followed the Cultural Revolution and rebuilt in 1981. Mount Jiuhua has always attracted creative minds; poets and artists have visited here. As a result, there has been a rich legacy of art in the Huacheng Temple. Great artists, poets, and playwrights such as Li Bai, Liu Yuxi, Du Mu, Mei Yaochen, Wang Anshi, Wen Tianxiang, Tang Xianzu and Zhang Daqian have come to the mountain. Their calligraphic works and paintings survive to this day and are now housed in the Jiuhua Museum of Buddhist Relics. 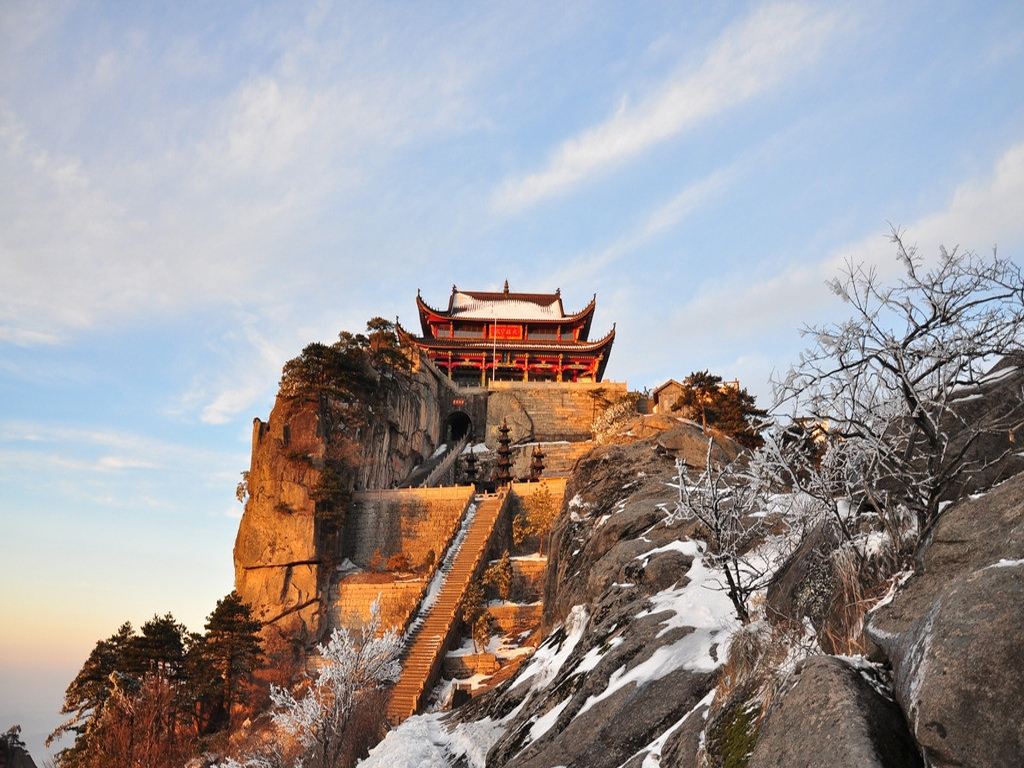 Shiwang Peak
Shiwang peak is located in the south of Tiantai peak. There is a ridge connecting the two peaks. It is the highest peak of Jiuhua Mountain at an altitude of 1342 meters. Shiwangfeng mountain is magnificent and beautiful, with many peaks competing. The peaks in the mountain are stacked, the rocks are jagged, the springs and waterfalls are flowing and the streams are gurgling. On the East and west sides of the peak, there are many dangerous cliffs. In the southwest, there is "poyu peak", which is 1143 meters above sea level, which is very similar to the bowl of monks. In the northwest, there is "Luohan peak" with an altitude of 1280 meters. The "Yan Xiantai" is located in the west of Shiwang peak. 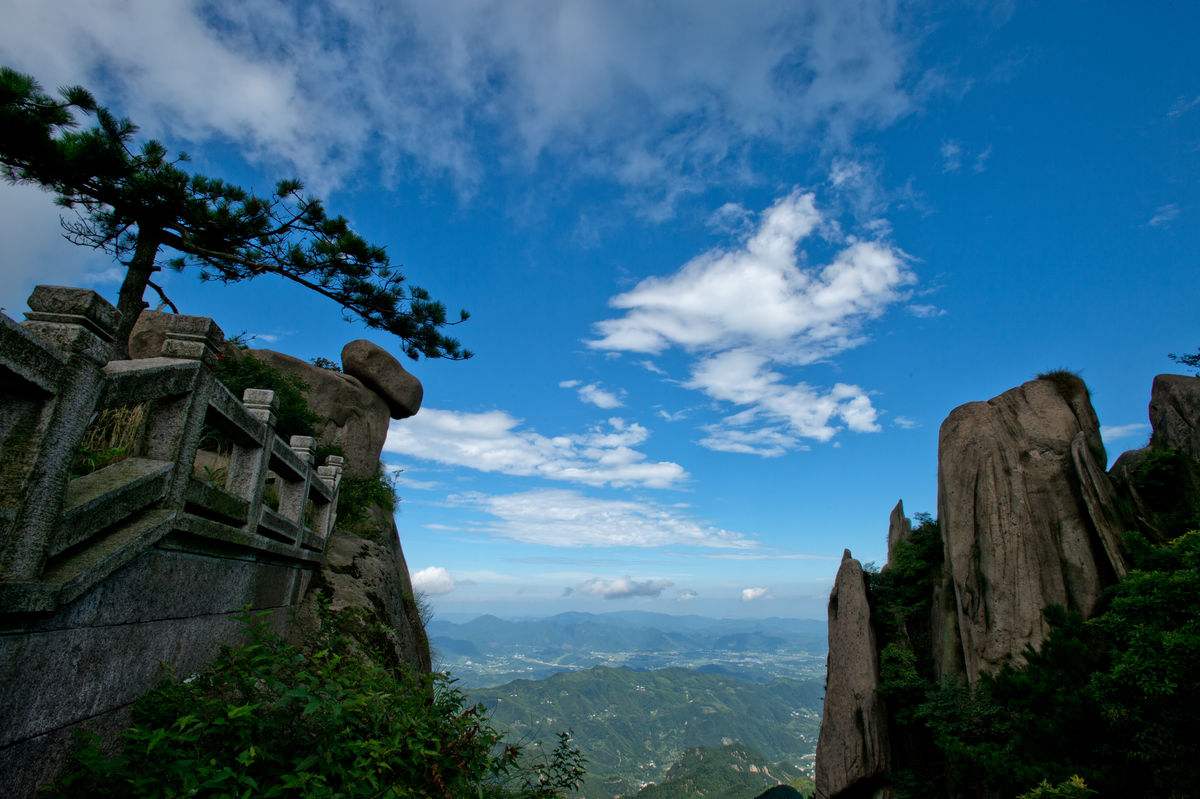 Guoqing Temple
Originally built in 598 AD during the Sui Dynasty, and renovated during the reign of the Qing Yongzheng Emperor (r. 1722–1735 AD). Like the Huacheng Temple, Guoqing temple is very large and 14 halls with 600 rooms. The most famous hall is the Hall of Five Hundred Arhats. The temple is located roughly 220 kilometres (140 mi) from the city of Hangzhou. It was the initial site for the creation of the Tiantai school of Mahayana Buddhism, founded by Zhiyi (538–597 AD). The temple covers an area of some 23,000 m2 (250,000 sq ft) and features 600 rooms in a total of 14 different halls, including the Grand Hall of Sakyamuni, the Hall of Five Hundred Arhats and the Hall of Monk Jigong. The exterior of the building features Chinese pagodas such as the Sui Pagoda, the Seven Buddha Pagoda, and the Memorial Pagoda of Monk Yi Xing (683–727 AD).

This temple is the site where indigenous Chinese Buddhism branched away from Buddhist teachings and doctrine commonly found in India. From there, the Tiantai sect of Buddhism spread to both Korea and Japan during the Tang Dynasty (618–907 AD). The tall brick Guoqing Pagoda built at the temple in the year 597 AD is still standing, making it one of the oldest surviving brick pagodas in China (after the 40 metres (130 ft) tall Chinese Songyue Pagoda built in 523 AD). 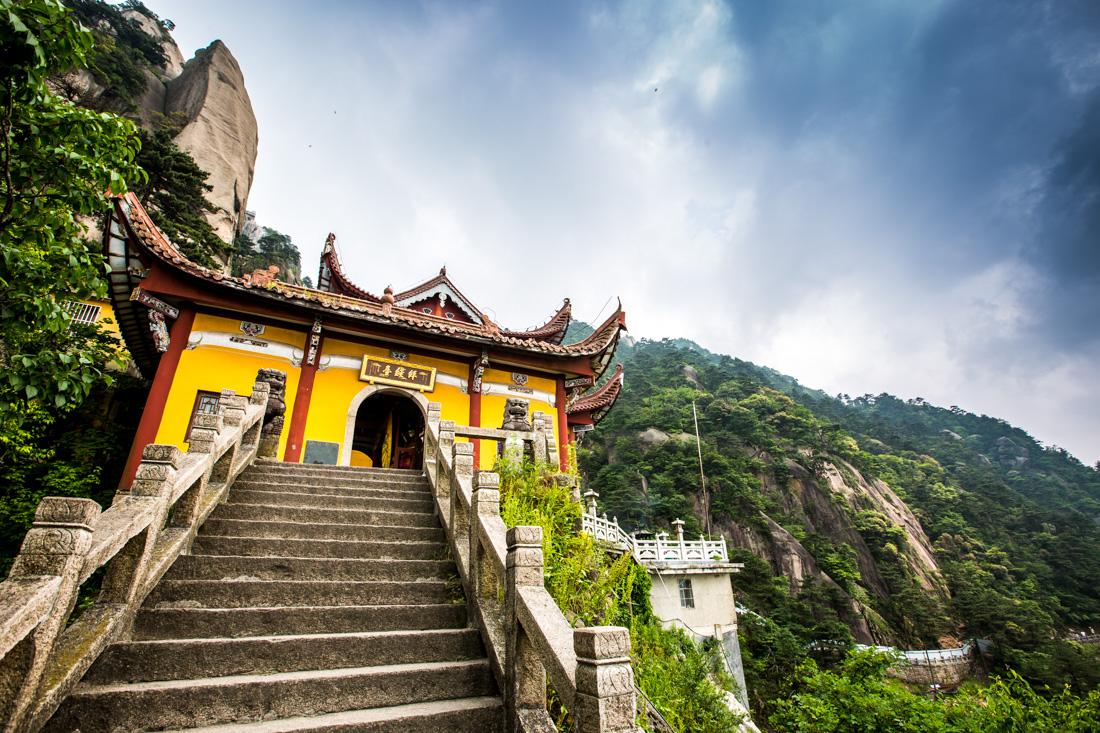 Baisui Gong / Longevity Palace
A fairly plain temple that has the gold plated body of the Monk Wu Xia on display. Wuxia copied Buddhist scriptures using a mix of his blood and gold as ink. When he died in 1623 at the age of 110 his body was kept in an urn and opened three years later. The body had not decayed so the monks covered it in gold. 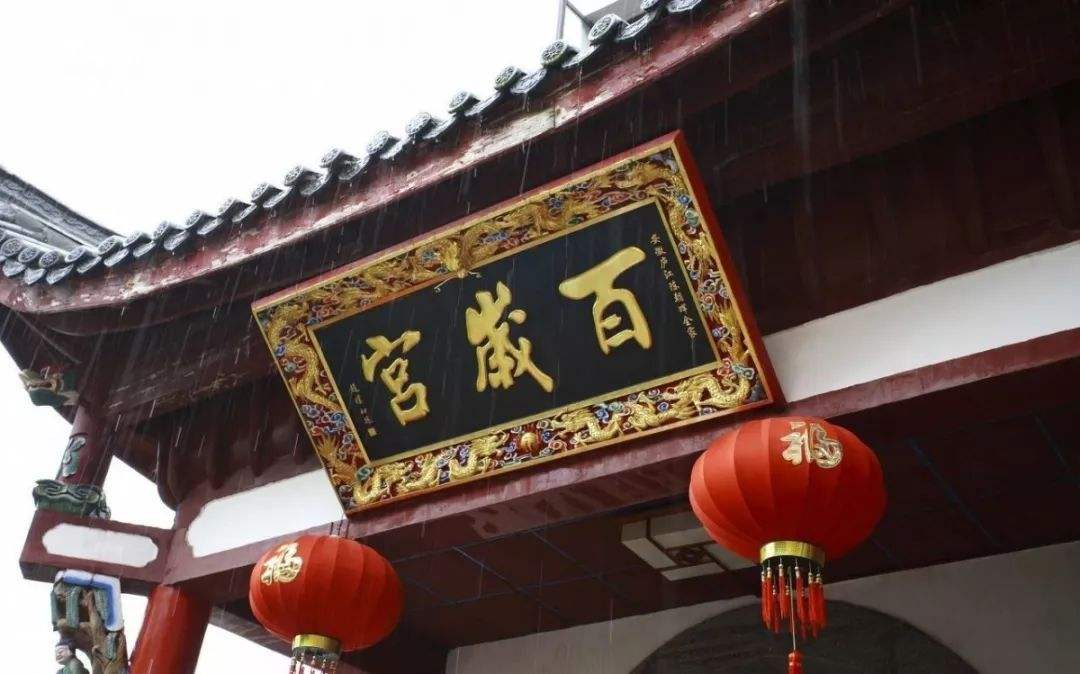 Tiantai Scenic Area
Tiantai Acenic Area is full of spots both in foot of the Tiantai Peak and the summit. Tiantai Temple is in the top of the mountain, with altitude of 1325 meters, it’s the saint site to worship ksitigarbha. It takes around 3 hours for visitors to get there and enjoy the scenery while climbing. It’s a good place to watch the sunrise, the sea of clouds and overlooking other peaks and whole view of Jiuhua Street. Or you can take cable way to Ancient Baijing Platform to save much time. Also the Huiju Temple, Phoenix Pines and kinds of Buddhist Nun Communities in the foot are worth to visit. Ancient Baijing Platform (Ancient Baijingtai): a must stop site for Prayers for its nick name of wish-making temple. Here has a big footprint in the stone left by golden ksitigarbha (the incarnation of ksitigarbha) when he had worshiped here according to legend. 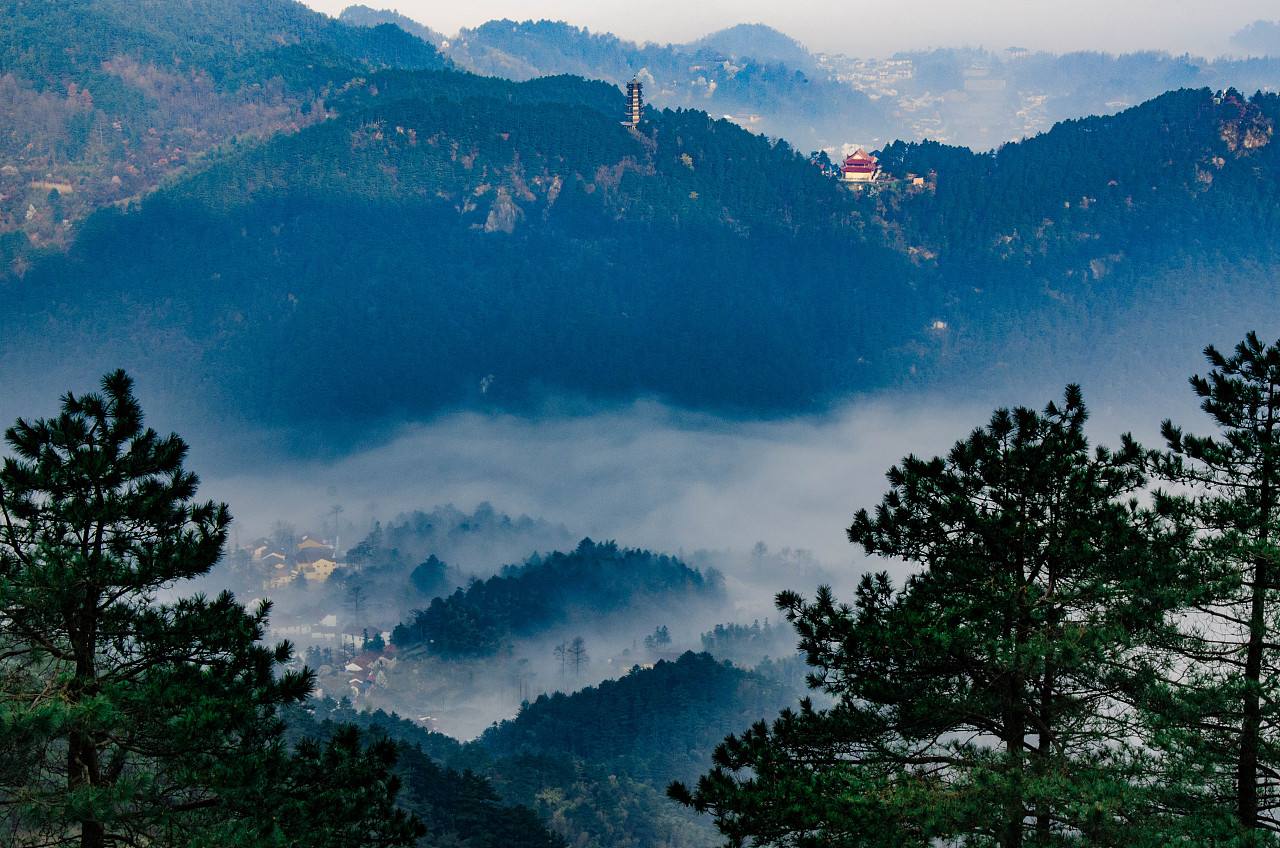 Dabeilou Temple
Dabeilou Temple (also Dabei Lou) is part of the Zhantanlin Temple found on Mount Jiuhua. This ornate temple, although styled after traditional temples, was built around 2001.The temple sits just below the Baisuigong Temple. Tourist and worshippers can walk up a steep path between the two temples or travel in funicular. 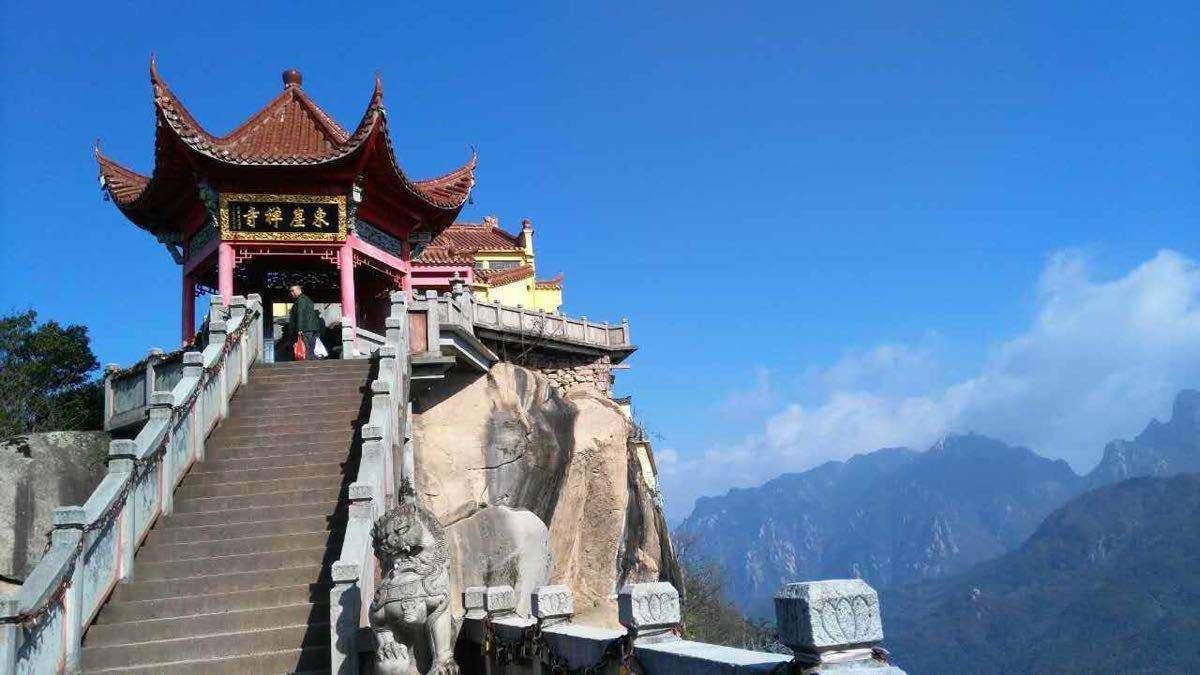 Hiking Routes of the Jiuhuashan Mountain
Jiuhua Mountain is one of the four famous Buddhist mountains in China. Buddhism culture and folk culture are integrated here, with unique cultural atmosphere and beautiful landscape. If you come to Jiuhua Mountain, you can choose different ways of traveling, according to your personal preference. There are two tourist routes: Front mountain route and back mountain route. There are 6 routes in front mountain: Baishuigong line, Tiantai line, Huatai line, Lion Peak line, Lotus Peak line and Shami Peak line.

What to Pack in Four Seasons
Jiuhuashan Mountain has four distinct seasons, mild climate, sufficient sunshine, abundant rainfall, concentrated summer rain, and significant of plum raining seasons. The most suitable seasons to visit Jiuhua Mountain are spring and autumn, and the climate is the most comfortable. Due to its rainy summer characteristics, you must bring rain gear and necessary protective equipment for climbing to Jiuhua Mountain in summer.The winter of Jiuhua Mountain is not too cold, but you should keep warm.

Travel Tips
1. You need to wear comfortable climbing shoes or sports shoes when climbing
2. When climbing, you can prepare a walking stick, which is good for walking on the mountain road.
3. The temperature difference between the foot and top of the mountain, so you need to take a windbreaker or sweater for cold protection; it is better to prepare a raincoat.
4. The wild animals in Jiuhua Mountain are mainly snakes and insects. Take some snake medicine in case.
5. There are wild monkeys on Jiuhua Mountain (near the Baisui Gong / Longevity Palace). Don't play with them at will to avoid being scratched.
6. The sunrise time in Jiuhuashan Mountain is 5:11am, and the sunset time is 7:15 normally.

Tour The Jiuhuashan Mountain with Hangzhou Huangshan Private Tour
We design private and tailor-made Hangzhou Huangshan Tours customized to your style of travel at affordable local prices.  We will provide a private & spacious car and a local professional tour guide with over 5 years guiding experience only work for you or your group. Transport, ticket, and dining (We find the most authentic dishes popular with locals) all we will arrange for you according your requirements. Please check our most popular Hangzhou&Huangshan Tours including The Jiuhuashan Mountain as below: